Too often we don’t want to rock the boat. But some boats NEED to be rocked. This article tells my personal story of not being able to master crucial conversations when the stakes were high. It was the impetus to find my voice. I tell it to inspire you to find yours.

The minister’s wife tried to talk to me at the grave side. I couldn’t speak. That was a common issue for me. If I had been able to speak a year before, I might not be watching my husband’s casket being lowered into the ground at that moment. My silence from the previous year contributed to the devastation I was experiencing in this moment. But, in reality, it all started long before that.

Uncovering the barriers to effective communication

The first step of the SpeakSTRONG Method is to Seek significance. It’s to stop and reflect back to when, where and how our communication is blocked. In my SpeakSTRONG book and my Say Something Significant eCourse, I take people through early memories to help them see patterns and habits that don’t serve them.

My early memories of silence

My earliest memory of being unable to speak for myself goes back to when I was four years old. I was allowed to cross the street, one block in any direction. When our neighbor found me playing across the street, he didn’t believe I had permission to cross. He brought me home in “disgrace” and ranted on and on like he was some kind of superhero who saved me and the planet from certain destruction. No one spoke for me. 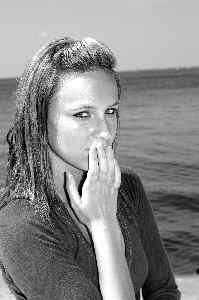 Silence is a lesson I learned all too well. The first half of my life was based on the theme of putting a front forward that wouldn’t rock the boat, create waves or even a tiny ripple. That continued until I avoided a ripple that was really an early tsunami warning.

The tsunami was my late husband Mike’s cancer. The ripple I avoided was his wrath when I voiced my concerns about early indications that something was terribly wrong. I got a clue of what when I read a passage in a book telling how Harvey Peterson beat his tumor to the punch. I was shocked to realize that Harvey’s symptoms sounded just like Mike’s. I showed the passage to Mike, who took the book, threw it across the room and screamed, “Damn it, Meryl, I don’t have cancer! And don’t talk to me about it again! Don’t you dare say anything to my mother.”

I responded in what had become my habitual way…if my husband was upset with me, obviously I had done something terribly wrong. If I had done something wrong, I needed to avoid doing it again. I returned to the “safer” waters of agreeing with him. I almost drowned nine months later when I lost him to untreated cancer.

Whose Hand Is Over Your Mouth?

After Mike died, I considered myself a victim of his denial. It took a year for me to realize I was really a volunteer who chose to put a false front forward when heartfelt honesty was the only hope we had.

It happened at my counselor’s office. He interrupted himself mid-sentence to ask, “Why is your hand over your mouth? Whose hand is that? Who is keeping you from speaking?”

I silenced myself because I didn’t want to rock the boat. Now I realize that some boats desperately need to be rocked. If I don’t speak for myself, no one else will.

I became a woman on a mission – a mission to figure out how to rock the boats that need to be rocked without capsizing or sinking.

That was over twenty years ago. I’ve rocked a lot of boats since then.

It didn’t happen overnight. Once I realized I had lost my voice, it took years to find it again. I started in safe environments. I started speaking up and out in the safe haven of my counselor’s office. (That was harder than you might think because my habit of “making nice” was so deeply entrenched.) I started being stronger with my son. (Was it possible that that beautiful being of light was manipulating me?) I set better boundaries with my boyfriend. (He resisted and we broke up.) I began to say no to my clients more often. (Some of them didn’t like it, but I sure did!)

Helping Others Rock the Right Boats in the Right Way

In my role as a seminar leader, I encouraged others to address issues and be their own advocates. I adopted a simple phrase that epitomizes my approach to communication – I’ll give it to you now. That phrase is:

Say what you mean and mean what you say,
but don’t be mean when you say it.

The simplicity of this phrase makes it powerful.

During my seminars I noticed how empowered people become when they get the right words to address their own hot-button issues. I call those perfect words PowerPhrases. When I shared my PowerPhrases, I saw people transformed before my eyes. They actually seemed taller. I decided to write my first book, PowerPhrases! to give people actual words for their most difficult situations, rather than just the concept. I started my weekly newsletter, Say Something Significant, (formerly A PowerPhrase a Week) to reinforce this new behavior.

Had I Known Then What I Know Now

It’s possible that had I had the words and the communication skills when my husband became ill, he would still be with me today. It was one of the most treatable kinds of cancer there was. There are no guarantees. I still may have lost him…but I would not have lost myself. It’s much easier to weather the loss of a love when you haven’t also lost yourself.

Master Crucial Conversations Before the Stakes are High

I highly recommend that you start rocking the boats on the small stuff so when the stakes are high, you’ll have the skills. If you can’t speak up when someone takes your stapler, you probably won’t speak up when they take your idea. Practice with the kids – they can’t leave. Then, when you need a quick, effective and appropriate response, it will flow off the tip of your tongue.

When I compare life now to my “pre-tsunami life,” the contrast is stunning. I used to live in a constant state of resentment. Now I’ve almost forgotten what resentment feels like. I used to have chronically conflicted emotions. Now inner conflict is rare for me. But best of all, while I used to hide behind a false front, I’m authentic now. I love being me. And I love helping others be themselves.

I also love saying what I mean and meaning what I say without being mean when I say it.

Seeking significance is the first step of the SpeakSTRONG Method. I still practice it regularly. It is a much more pleasant practice than it once was. There was love, grace and power hiding behind the muck that kept me from wanting to explore my habits and patterns. It’s a bit like Pandora’s box – there were demons when it was first opened, but at the bottom there was good stuff. And very significant. It’s a powerful journey.