Who would have guessed that when asked to build a tall tower out of marshmallows, spaghetti and a few other odd materials, kindergartners would far outperform recent business school graduates? That’s what Tom Wujek discovered with a team-building and problem-solving exercise.

It was am impressive result, but what impresses me more is how much better CEO’s performed when they worked on the project with admins. 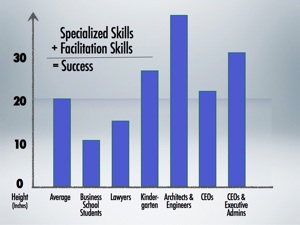 Why do business school students perform so poorly? Wujek referred to posturing and power plays that ate precious time. Why do admins and CEO’s together perform better than CEO’s? Wujek notes that admins are used to looking at systems and at facilitation. I believe admins compensate for their exec’s weaknesses and are used to helping them focus forward.

To me, there’s a big takeaway for admins in this. If you’re not SpeakingSTRONG with your exec, you’re depriving him or her of your expertise. The partnership adds to effectiveness, so don’t hold your skills back.