Rhonda posted an interesting article about her speed-dating experience. In ten “dates,” not one man asked her about herself. She has since married a wonderful man, but he triggered her ire when she called home each day while travelling to have 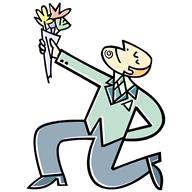 him tell her about his day, but never inquire about hers. On day five, Rhonda asked, “Don’t you even want to hear about my day?” He noticed his omission, apologized, inquired about her day, and has been more attentive ever since. A success story? Yes… and…

In my way of thinking, if ten men and her wonderful hubby all talk about themselves and don’t think to inquire about her, it might be a trait, not a flaw. If the same men were speed-networking with each other instead of speed-dating with the ladies, chances are the conversation would be balanced even if neither party invited the other to talk about themselves. To get irritated and point out the omission paints it as a flaw, and can set up a dynamic where the men in your life ask you about your day, not because they care, but because they don’t want to tick you off. Personally, I’d rather have a man who rarely asks, than one who asks because he’s afraid of angering me.

Everything we do courts some kind of relationship dynamic. Getting irritated and confronting someone for not behaving the way we think they should courts rebellion or compliance. Is that what you want? CONTINUED

I’ve been receiving a plethora of birthday greetings – including one that said, “You should make your husband take you to lunch.” When I read it, I thought, “I don’t make my husband do anything.”

But he does a lot of wonderful things for me. We court the kind of relationship we want with each other every day. We collaborate without compromise. (By the way, I’ve grown to appreciate the fact that my husband doesn’t ask me about my day. That means when I want to talk about it, I can offer. When I don’t want to talk about it, I enjoy the privacy without seeming secretive.)

Courtship isn’t just for romance. In business we court each other, too. I court collaborative associations with people whose thinking inspires me. I court synergy with my assistant and she does the same with me. We court customers for long term business dealings.

What are you courting? Compliance? Or collaboration without compromise? Think of all your relationships as courtships. It changes how you go about everything, doesn’t it?