Are you setting someone up for failure when you start them out on a project with very little direction to see what they can and will do on their own? It might seem so, but that’s true only if you judge their potential by what happens. In fact, it can be a very successful journey of discovery if you understand the process.

Certainty is a comfortable thing. Direct the whole thing and you minimize surprises. Sometimes that’s exactly what you want. It’s a good way to implement. It’s not a great way to improve. Experiment a little when you can. 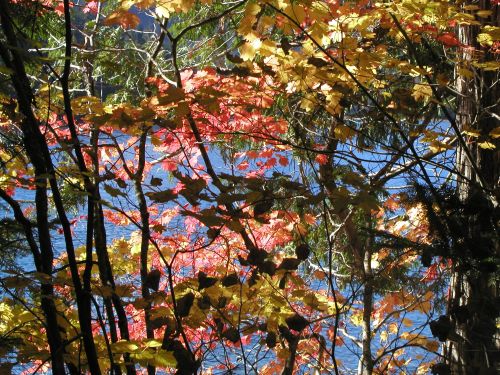 My friend Sherry sent me pictures of fall in her town in Oregon. Pretty nice, huh! I told her:

It was true. I’m not there with her physically, but I shared in the awe of her experience. I wanted her to know the gift of the pictures moved me, and sharing my response to them rather than my assessment of them (“they were beautiful”) was my gift back to her.

My assistant Angela tells me she gets Goose Bumps sometimes when I say something that moves her. I love that much more than hearing an opinion, no matter how positive.

If you don’t actually gasp or get Goose Bumps, don’t fake it. But do share more than just your thoughts about things. Share your experience.

It used to take Wanda days to center and get clear and muster the courage to set boundaries and to address issues. Now it takes minutes. The fascinating thing about it is that as she reaches the point where the words roll naturally off her tongue, she finds that people accept her assertions with little resistance. It’s no big deal.

That’s what she said to a coworker who tried to get her to do his work for him. He took an appointment off her calendar, and that was the end of it. She was happy to have the hour available for things that are her job. Practice SpeakingStrong. It gets easier and is so worth it.

This is land that was devastated just two and a half months ago by the Waldo Canyon Fire. Nature is so resilient. So are we. 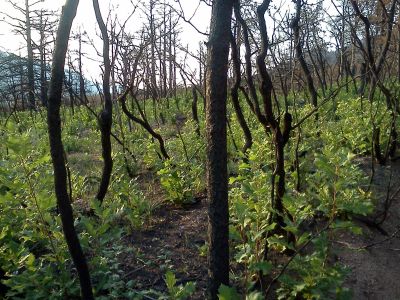 Last night I attended a gathering with an author I’ve admired and followed for over 20 years. I’ll call her Claire. I walked away with many gems, one of which was the difference between talking about what matters and structuring it into a process.

The theme was self-care. Claire urged us to take care of ourselves so we could support our wounded community (the effects of the Waldo Canyon Fire) without coming from a position of need. However, the gathering was structured in a way that discouraged self-care then and there. After about two and a half hours of facilitated dialog, “Nancy” asked if she was the only one who wanted to pee but also didn’t want to miss anything. Claire told her to go ahead and take care of her need. That required Nancy to crawl over other participants to step out, since the chairs were set in a circle with no easy way to get in or out. As Nancy left, Claire introduced a fascinating topic, which fed Nancy’s concern about missing something.

Don’t Just Talk About What Matters, Structure it InRead More » 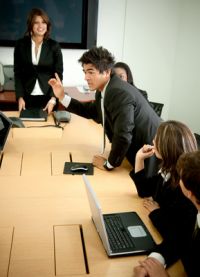 The gender research is in. After all these years, women still speak drastically less when outnumbered by guys. And that’s bad. Or is it?

I don’t care how MUCH I talk. I care that the perspective I offer contributes. Of course, the two are related. The researcher reported:

“When women participated more, they brought unique and helpful perspectives to the issue under discussion. We’re not just losing the voice of someone who would say the same things as everybody else in the conversation.”

There was one exception to the finding. When the resulting decision needed to be unanimous, women spoke more, and the decision reflected more community values. In other words, when every opinion matters by design, every voice is heard.

I’ve spent 25 years learning to SpeakStrong, and be direct when my inherently more feminine perspective is ignored. I’ve also spent much of that time learning to change the game so I don’t have to compete in a style that is unnatural to me, and less refined than I’m capable of.

It would be inefficient to require that every decision be reached unanimously. There are other ways to structure discussion so every voice matters. Many of my communication formulas do just that. Often, just pointing out how unbalanced a conversation is makes the difference. Phrases like this can change the dynamic.

It’s a meta-message that addresses context. Some say content is king. I say context is. If the context won’t let you get a word in edgewise, create one that does.

How do you present to top executives? This SlideShare offers useful tips.

5 Tips for Presenting to Executives from speakingppt

I post this SlidesShare about presenting to Executives because it is excellent and useful.The author talks about “execuphobia”, which of course means, fear of executives. He suggests you fear FOR executives instead of being afraid OF them. It’s a partnering mindset where you’re on their team to help solve their problems. That’s a great step toward curing execuphobia.

I studied it before I spoke to a room full of lean manufacturing executives. However, instead of applying his advice directly, I took another angle. (I wouldn’t be me if I didn’t. 🙂 ) My thinking was – execuphobia is the challenge I need to address, not a trait I need to jump through hoops to accommodate.

Well, my fear FOR executives is that by inspiring fearfulness, they miss out on a lot of input that they need in order to lead well. So my talk was aimed at breaking down the walls for conversational leadership. I didn’t do that by getting to the point in one minute. I did it by catalyzing a conversation where THEY made my point in one minute. They made a lot of points for me, and admittedly, some of them took more than a minute to get to,

My style was familiar to them in theory but not in experience. Some loved it, others not so much. Some valued the way the approach cracked the surface of the discussion and got into underlying concerns. Others thought I should have been more directive.

I had a room full of talented, accomplished men and women. Why should I have made all the points? I left that approach to the other presenters and tapped into the brilliance in the room. I learned a lot, and so did they. It just might not have been what they thought they would learn. If they apply what they experienced as well as what they heard, their people might not need SlideShares about handling execuphobia.

My husband Bob does the grocery shopping on Saturdays. Sometimes he does other things while he’s out, so one Saturday morning I asked, “What are your plans for today?” He said, “I think I’ll do the grocery shopping.” I saw that as a given, and and playfully asked, “When did you plan that?”

I cracked up because it’s true – his day had been largely planned five years before. When I did my own shopping, I would tend to go when I opened the fridge and couldn’t find anything to make a meal out of.

I enjoy the benefits of a fridge that magically replenishes once a week. His system works. The only question is, if it stopped working, would he change it?

Planners can be rigid, and those of us who are more spontaneous and organic can be chaotic. We’ve tempered each other over the years. While I never will embrace his level of structure, I gladly embrace the principle of creating systems that work. While he will never embrace my fluidity, he gladly embraces the principle of shaking things up when they get stagnant and just don’t work anymore.

I love the phrase “ït’s a process.” It acknowledges the fact that things don’t all happen linearly, in nice, neat straight lines.

Or at least not always.

My hubby bought a new car yesterday. We could have spent several more days checking out options, but it seemed right to go ahead and decide. Today he’s second-guessing himself.

Does that mean he made a mistake? Not at all. I told him,

I meant it. It’s a big decision and a new reality, and it takes time to get used to it. It takes time to put the shouda woulda coulda’s to rest. He’s glad to be able to express those doubts instead of pretending he feels something he doesn’t. It IS a process.

Can you imagine what I might have been tempted to say if I didn’t have an awareness of process? Things like – you’re just wondering this now? Why didn’t you wait if you weren’t sure? You should have waited until you were sure.

True from one perspective, but not helpful with the process. When you have a clue of what the process can look like, it keeps you from reacting to it.

He’s out driving his new car around the neighborhood just to get to know it. He’s going through his process. I’m writing this blog post. I’m going through mine.

I like balance by nature. So when something seems imbalanced, my tendency is to fill in what’s missing. I’m getting better at it. I used to be considered contrary. Now I’m considered complementary. Or at least when I do it well.

A brilliant friend asked for input on a SlideShare. It was informative but not particularly engaging. I reworked it in a way that was highly engaging. My version was intended to highlight an engagement tone, not to show him what a balance would be. Rather than add engagement to his writing, I went to the other side of the polarity. My intention was to give him an alternative to marry to his version.

The last three sentences are the meta-message about my input. A meta-message provides context so people know how to take your words. I didn’t want him to think I was suggesting my version as a final one.

A meta-message also helps you understand where you’re coming from.  I wasn’t always conscious of my tendency to fill in what’s missing. I’d doubt myself and wonder if I really was contrary. I didn’t know how to use that trait effectively. When I create my meta-message, I become more consious of my communication options.

People like to put people in boxes. We all do it. Your meta-message guides people to put you in a bigger box than they might reflexively. That gives you more room to operate, and that’s a good thing.