I strive to get things done right the first time, and increasingly, I do. But sometimes, that high intention becomes an obstacle to doing anything at all.

Case in point. My speakers buzzed after we got our new internet service. Eventually I realized the buzz was through my speakers, and from there, I figured out that the buzz was because the technician had placed the modem on top of my speaker.

Okay. So I planned to clear out a cabinet to put the modem in. That would take a while, so I wasn’t getting to it. But just now, I moved the modem to another table and the buzzing stopped. It took one minute max to actually do. It was a good thing for me to do what I had put off because I wanted to do the great thing. Note to Jim Collins – Sometimes, great is the enemy of good.

Ben’s printer didn’t work after Welcome Home Moving and Settling In Services moved his entire home into an apartment and set everything up. It was an easy fix – they had neglected to plug it in.

That was a forgiveable error – a minor mistake. But more than that, the singular nature of that minor flaw provided a testament to what a great job they did overall.

To a perfectionist, any mistake, or oversight, is a flaw. To the alchemist, it can be an opportunity to appreciate overall excellence. You don’t notice tiny stains in a heavily soiled table cloth. You do notice them in a very clean one.

The exception proves the rule, and the rule here is that this company does a fabulous job. And it wouldn’t surprise me if they remember to plug printers in every time moving forward. Because they didn’t get to be that good without flipping their flops forward.

But who knows – perhaps leaving a small flaw is a strategy designed to create a contrast that highlights the overall excellence.

Barbra teaches psychology in an elite college. This summer, she’s doing something different. She’s teaching poetry to high-school kids – many of whom can barely put a sentence together.

She rejected the idea of a textbook. I don’t know the full approach, but she did share that she showed videos of amazing poetry from youngsters who look “just like them.” She said these rowdy teens get so quiet you could hear a pin drop when when she plays the videos. She also noted that they are beginning to find their voices.

That reminded me of how when I helped someone who wears a lot of plaids through a very touch transition, I pulled out my plaids. She commented on my clothes every day – and I swear, she was more open to me than I’ve known her to be before.

I didn’t put on a front. I emphasized a part of me that is like her. And that helped us connect.

People tend to trust people who look like them. If it helps you get through to someone, why not emphasize similarities?

That’s a PowerPhrase I don’t need to explain.

My father brought up a touchy conversation about something that happened many, many – over 25 years – ago. It was too explosive to talk about then, but now conversations are much easier than they were. It was an opportunity for intimacy. I wanted to take it. And I kept my vendor waiting several minutes as we explored it. Then I told him,

It was, of course, the truth. It also gave me the opportunity to shift my perspective from the one that was frozen in time so many years ago. It’s a quick process now – but it’s still a process. I went from defensiveness to offense to forgiveness to embracing the opportunity to clear up old conflicts and get to know each other better now. In the past, any one of those stages could have taken me days, weeks, months or even years to move through.

“How’s your day going?” I asked. He answered,

I loved it. Who can’t relate to that? It was a considered response to a general question.

So… how’s your day going? Can you answer with a single word that says it all?

On Mother’s Day, my sister got the “Best Mother’s Day present ever.” Mom called her from the hospital. Just a few days before, we thought we had lost her to a raging infection.

Today, mom was released from skilled nursing for four hours to attend a Father’s Day party at my sister’s house. This was her first outing since she teetered on the edge and came back.

Wednesday, she and dad will move into a wonderful two-bedroom apartment in a senior facility called Renaissance. I believe it will be a renaissance for the whole family. It will be a fresh beginning. Everyone will be relieved from carrying more than they can handle. After such a long slog, I’m beside myself with excitement for them.

I hear that many seniors revel in these kinds of environments. For many, it’s like high-school all over again – the good part of high-school, that is. Their basic needs are taken care of, there are so many things they can do, and they are free to enjoy their lives. That’s not the guarantee – but that is the opportunity. Like all opportunities, it takes exploration and experimentation to figure out how to take advantage of them.

And like any respite after crisis, it’s too easy to stay in crisis mode when we don’t need to anymore. That’s where I come in.

Helping people through transition isn’t just about doing things for them. It’s about helping to shape the vision of a beautiful new beginning. Yes, there is an ending associated with it. It’s only natural to mourn that. But the pain of loss is gentler when there also is the anticipation of moving toward something new and appealing. I’m not making anything up when I paint the picture of possibilities for them. I’m sharing my genuine excitement about how much they can enjoy this chapter of their lives. And that is as important or perhaps even more important than taking care of business and doing things like making certain the movers show up on time. 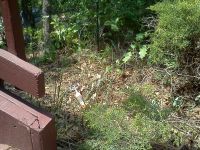 I just got a new word. Duff.

The “duff” in our yard isn’t decaying. That’s the problem – it’s drying out. It’s a fire hazard. If it were decaying, it might be fertilizer. Black Forest, Colorado is burning as I write this, largely because of how much duff there is.

Duff also is defined as: noun, the buttocks or rump,
and: duff, noun, something worthless.

So the Waldo Canyon Fire that we narrowly escaped last year, and the Black Forrest Fire that people we know are fleeing from now, kicked me in the duff, giving me added impetus to get off my duff and clear out my duff – in my yard, home, business, heart and psyche.

It’s a big job, but I personally have the luxury of being able to do it one section at a time, since we’re currently not facing an immediate fire threat.

City and fire officials tell us they learned a lot from the Waldo Canyon Fire last year. I know they did. And we’ll learn from this one, too. Maybe next year we’ll get serious as a community about getting off our duffs and clearing out our duff.

In the meantime, I send gratitude to those who are fighting the fire, and my prayers to those who have lost or may lose their homes. And I’m clearing out my own duff.

After my 93 year old father got hearing aids, everything changed. When we got up in the morning, we were quickly reminded by my first words if he had forgotten to put his hearing aids in. His whole body showed me he was straining to hear.

His voice is softer when he speaks now. That’s because he can hear himself. With the strain to communicate reduced, our conversations have more tenderness.

Strain inhibits. 39 years ago I learned a meditation technique – TM – which is based on effortlessness. Efforting undermines meditation effectiveness. And, I find, strain undermines effectiveness in most of life. Set up your conversations, activities, work flow and life in a way that requires minimum effort, and you actually get more done. My hubby, Bob, lives by the motto “space for grace” now, and his income is actually on the rise.

Plus he’s way more fun to live with. He’s effective and he’s gracecified. Like my 93 year old dad.

It wasn’t in the plan for me to spend hours each day reconfiguring, reworking and redesigning my website right now. Or let me say it wasn’t in MY plan. We finally got a spring here, and the trees and flowers are magical. I’d love to spend hour out of doors. Yet here I am, figuring out how to make my website a) functional and b) beautiful. It’s what I’m doing, thanks to malware and hacking, which forced me to upgrade.

So it’s yet another a learning curve. You know what that’s like? I spent many hours learning my old Joomla platform. I got to a certain level and let the experts handle the rest or left off the bells and whistles. Now, I’m learning a new platform. I’m also learning that I’ve learned how to learn. I am capable of doing so much more on my own than I was previously, because I’m more able to find out what I need to know. It’s exciting to me to discover the answer to challenge after challenge that had plagued me.

I am working with a computer pro who also embraces discovery. He hasn’t used these exact words, but his response to questions often amounts to: “I don’t know, but I’ll find out.” And he does – if I don’t beat him to it.

It does take patience. It’s a process. And some of my links aren’t working right now while my site is in this transition. Sorry about that! (And a genuine thanks to those who have pointed out links they were looking for and couldn’t find.) I could make myself crazy and insist it all be perfect before it be live. But the malware made this too urgent for that, and I have twelve years of site to update. So I remind myself, this, like everything else, is a process. And I am learning, learning, learning “thanks” to the hackers whose antics made this a priority for me.

Last year I created a SlideShare called “Learning to Learn with the Improvement Kata.” Now I delight in how much I have learned to learn. I hit walls and want to give up at times. But then I find the next level of understanding and new worlds open up. I hope they are opening up for you too.

Learning to learn with the improvement kata from Meryl Runion Rose