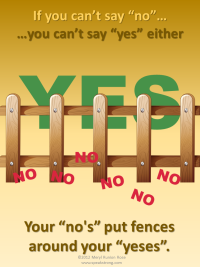 “The list keeps getting longer and you still haven’t learned how to say no,” Ron lamented.

Ron is one of Karen’s managers. “At least he gets it that I’m overloaded,” Karen told me. “Now, if only my other manager, Steve, would get it too,” she added.

“You’re the one who needs to get it,” I told her. “It’s up to you to manage your workload. You’re not Steve’s victim. You’re his volunteer, by not setting boundaries.”

Karen had hit a wall from too much to do. She actually got sick. But her 101 degree fever didn’t stop her from fulfilling requests from Steve. It just postponed a few.

She likes to say yes. Many admins do. But without the ability to say no, yeses are a setup for failure and resentment.

As a recovering yes-sayer, I know. I also know that my “nos” put fences around my yeses. They protect what matters most. The ability to say no is a true success skill. If you can say it gracefully, you’ve really got something. The chapter in my PowerPhrases book on how to say no gives a lot of tips on how to make that happen.