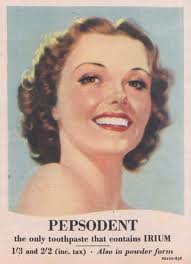 I sent a copy of “The Power of Habit” to my dad, and he’s reading it “with interest.” He was a bit disturbed by the story of Pepsodent, however. Before Pepsodent, few people brushed their teeth, and oral hygiene in the US was on a steep decline due to increased sugar consumption. So Pepsodent wasn’t just selling toothpaste, they were selling the whole habit of brushing our teeth. The factors that inspired that new habit had nothing to do with the effectiveness of the toothpaste or of brushing. Pepsodent sold the foam and the fresh minty taste. The advertising made some false claims about those features, and those false claims, along with superficial benefits such as tingle, inspired our nation to adopt a healthy habit.

Dad rejected that completely. But I pointed out that, while it was deceptive, it wasn’t sinister or evil. I claimed (and claim) that sometimes it’s acceptable to trick people into doing what is good for them.

I call it conspiring for good.

I sent the book to my father because he had complained about his inability to “stop doing stupid things.” I told him the book could give us a clue about how to create new habits. That’s the book’s “fresh minty flavor.” But a deeper benefit, to my thinking, is that it’s really powerful to discuss the nuances of my moral compass with the person who initially implanted that compass deep in my psyche. Even if the book never alters a habit for either one of us, I’ll say it’s working.