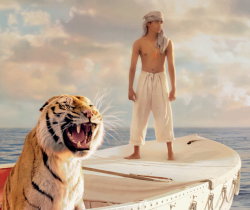 If you’re a zoo keeper, it’s important to know how close people can get to your animals without triggering the flight response. It’s different for every animal. Flamingos require 300 yards. Buffaloes require 75. The haughty ignore individual differences, but the wise study them and avoid triggering unnecessary resistance.

People get territorial too, and it’s helpful to know how to relate to them without triggering their flight response.

Bob and I are reading Life of Pi.  What a great book!

As Bob read to me last night, I thought of a coaching client whose manager is very territorial and can get threatened when her perceived “turf” is violated. Working with her is a bit like waking up to see there is a tiger living on your lifeboat. What do you do?

It’s not ideal. But it’s kind of how life works. Those of us who adapt to the natures of the “animals in our zoos” (or on our lifeboats, or in our office) have the collaborative and cooperative advantage. We relate to others as they are – not as we wish they were. We create and play our own game – which is where our power is. If that means going beneath the radar while others prance around roaring, so be it. We get the last laugh, even if it’s a secret last laugh.