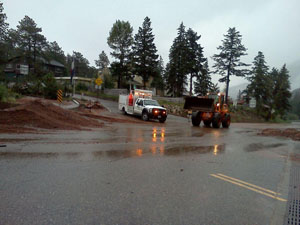 In normal times, 4.5 inched of rain over a 24 hour period isn’t a cause for being on alert. But these are not normal times in Colorado Springs – and as of last night, Colorado in general. Bob wanted me to stay in town last night because of flash flood warnings. He was worried the pass into town would be closed and I would be unable to catch my flight to LA.

I was concerned too, but wasn’t ready to leave and thought I was safe to stay. I figured, worst case scenario, I would need to drive the back roads to South Denver and take the interstate back down. That would turn a twenty minute drive into a four hour one, but it was possible.

When when a deluge hit just before bed, I started thinking I should have listened to Bob.

I was up in the night watching the coverage of flood events, including the closing of Highway 24, which is the only direct way in to Colorado Springs. Not only that, but Denver was getting flooded too. My escape route might have been treacherous.

When I’m a breakout speaker, I know that if my best effort to get to the conference isn’t good enough, it won’t put a big hole in the event. But when I’m keynoting, as I am tomorrow, it has a much bigger impact on the event.

I was stressing in the wee hours of the morning. Then I asked myself what my biggest stress was. It was me being hard on myself. I had made a calculated guess based on the information I had at the time and chose to stay put until morning. If my guess was wrong, I would have to cut myself some slack (while duly noting the situation for future planning.) If the rain didn’t let up, at least I could let up on myself.

The pass opened at 6:00 and I left at 8:00 for my noon flight. When I arrived at the airport around 9:00 I had an alert that the pass was closed again. I happily wait at the airport.

We are all becoming more savvy about what rain means in our community since the fires last year. In the process, many of us are learning that when life is a bit hard on us, we can at least let up on ourselves. (And each other, of course.)

As I told my assistant Cassia, we strive for perfection, but we don’t expect it.