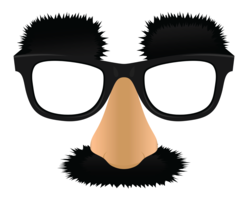 “I can’t believe I spent that much time working that hard to be someone I’m not!” Sue confessed. I tried to tell her when she was in it, but she needed to go through it herself. Now Sue is “herselfer” than ever.

“That’s what I had to do to get where I am now,” she shared.

“Watch me,” the speech bubble says on “Lily’s” video image in her promotional email. I know it means – watch this video – and yet it strikes me as what many in the information industry are really saying. It’s all about me. Not, it’s all about you. Watch me because I’m special. I have the answers. Everything you think you know is wrong. Listen to me, and you, too, can have all the toys, privileges and admiration I have.

“Lily” is enormously successful. People do watch her. They must benefit from it.

But for Sue, Lily’s center was a journey into angst and exile.

Sue was making some inroads and getting some business by being someone she’s not. But it was hard work and it wasn’t making her happy. It was tough for me to watch, and who knew? She might have tapped into some aspect of herself that I didn’t anticipate.

In some ways, that’s just what happened. Being who she’s not helped Sue become herself in deep new ways.

Sometimes we return home after being lost, and see home for the very first time. I’m so happy to be part of Sue’s welcome home committee.