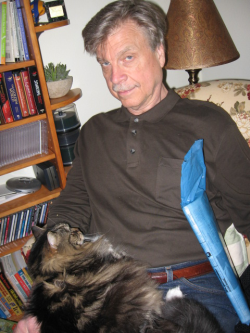 Sometimes Bob will run through everything he has to say to me without any room for a response, and start to walk off as he says his final words. I’ve mentioned it a few times, and he has had no awareness of it.

Last night when I called him from Baltimore, he asked about my presentation and then went into a run down of his day without leaving room for a response. I remembered something I had wanted to tell him and waited through three or four topic changes with no room to interject. When he started to close out, I stopped him and told him I had something I wanted to tell him. He told me his dinner had been waiting for twenty minutes; however, he did invite me to share my story with him.

The dynamic doesn’t feel good to me, but I knew I wanted to wait until I didn’t feel like complaining to talk with him about it. When I called him tonight, I explained how I experienced the conversation and suggested we figure out a way to keep that from happening.

And that’s what we did.

Both lean principles and SpeakStrong principles say: “Talk about what you want more than what you don’t want.”
In other words, you need to fix the process, not the person, flip your complaints into requests, and take action to iterate your way to a new and better reality.

And that is what we did.