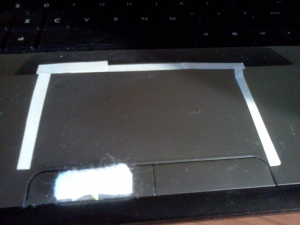 I’m in Cincinnati now, making my father’s computer experience doable. We’ve gone from constantly struggling with tools to Dad being able to write about a paragraph a day, which I think is serious progress.

If I were as serious about sharing how to make small improvements that add up, however, I’d do what Paul Akers did at the MWCC lean conference. During Paul’s introduction, Conference Organizer Jeff Fuch shared something he did to streamline ordering coffee at Starbucks. Paul created a video-tape about it and posted it to YouTube right after his keynote. It’s below. (Yes, that’s me on the left.)

Paul also made and posted a video about how to make his slides brighter after someone told him his slides were dark and showed Paul how to fix them. Then he ran off to catch his flight to his next meeting.

If I were to follow Paul’s lead perfectly, I would create a video about how I put a piece of a furniture coaster on my father’s laptop left-click button to keep him from pressing the scroll-pad instead. But I posted a picture instead.

Paul Akers is the CEO of FastCap – a manufacturing company. He’s a busy guy, but he manages it by taking care of things right away. I’m still cleaning out and fixing a lot of past messes, but watching Paul get things done fuels my aspiration to get current and stay that way.

I love it when leaders like Paul walk their talk.