Relationships often have some friction right when they’re ready to grow to the next level. It’s helpful to know that. I mentioned a habit that Bob has that shuts me down. He was able to hear me – really hear me. Later he told me his knee-jerk response to suggestions is to think people are telling him he’s broken. He has learned to re-frame that. Now he tells himself: This one comes from Nora Hooper. Her friend told her she had won the lottery. What she meant by a winning lottery ticket was that her son had bought her a house.

Since then, Nora has been using:

as a PowerPhrase. She prefaces references to any blessing or mention of something she’s grateful for with that phrase.

I think Nora won the lottery when her friend treated her to that PowerPhrase. Angela forwarded an email from an author she admires whose inner over-achiever is demanding results immediately after her hiatus after her mother’s passing. Angela forwarded it to me because we had just been speaking about how easy things are when the spirit is there and difficult when it’s not. I sum it up this way:

I’m thrilled with how my writing is unfolding – and yet it all seems to come in stops and starts. CAN I write when the spirit leaves me? Yes. But I don’t. Or try not to, anyway. I take it as a signal that it’s time to do something else.

I love my friends who remind me of that when MY inner over-achiever has an agenda that my spirit can’t stomach. I task my inner-achiever with nourishing my spirit and coaxing it out. Drive is no substitute for spirit and force is no way to animate spirit. 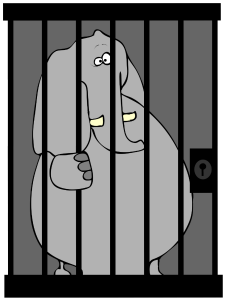 Things change in relationships. We can go along feeling fine about everything. Minor irritating habits don’t bother us at all, we accommodate each other willingly, and life is good.

And then we outgrow ourselves. The relationship outgrows itself. We can tell by the little things we do – like in the old song “You’ve lost that loving feeling.” We can also tell by checking out the roles we feel ourselves playing. Parent/child roles. Investigator/accused roles. Villain/victim roles.  All signals that it may be time to have a conversation about an elephant in the living room.

Or we may simply need to reaffirm our center (centrovert) instead of playing supporting actor in someone else’s drama.

For example, when I feel constrained in a relationship, it helps me to remind myself “I am not his prisoner, nor will I be his jailer.”

Of course, to flip that forward the statement is:

Feels good to me! If you’re familiar with my writing, you’ve already figured this isn’t a post with advice to fix your relationship by dinnertime. It’s a post about the fallacies in that title. Well, it’s a subtitle from the cover of “O Magazine.”

So before I start my rant, think for a moment. Why might I object – more than just a little – to that subtitle?

Okay, first, there’s the word “fix.” That word sounds like the relationship is a static inanimate object like a car to be acted upon. Relationships are dynamic. If my hubby decided he wanted to fix our relationship, I’d probably run screaming from the room, because the word implies unilateral repair based on his ideas of what our relationship needs. A broken car doesn’t have any say in the matter, but all parties in a relationship do – or should.

Secondly, healing, deepening and improving a relationship is a process. It takes time. Yesterday I posted about a healing among family members that I helped to facilitate over the course of a year. It was a process with dynamic stages. Many pieces needed to be put in place before the relationship could be… not fixed… but mended.

It’s disappointing for me to see Oprah perpetuate the cultural imbalance of treating dynamic systems like objects and promising instant results. But then, it’s because of those attitudes and other like them that the world needs me.

I haven’t read the article. I doubt I will. Even if it redeems itself somehow, to my mind, it doesn’t make up for the perpetuation of false and imbalanced attitudes.

To Eric, the offer of money was a signal that his father had given up and was giving his resources away. To me, it was a blessed sign that our father is feeling secure in his own finances, and that he has forgiven his son for not being the boy or the man his father thought he should be. If Eric had been born 20 years later I’m sure they would have discovered a syndrome he fits in to. In his era the only label was lazy.

There always was much more to my brother than that. Having grown up beside him, I will say the fact that Eric created a situation for himself where he only needs a small monthly subsidy is more than I had hoped for. I let him out of the dog house long ago. My father took a bit longer.

Eric was reluctant to accept the money. He didn’t ask for a handout. He is challenged in many ways, but he isn’t greedy. I assured him I thought it was a good thing and almost a gift to his father to accept it. It is a fence mender.

My mother passed before we were able to make more than a superficial peace with each other. It’s a blessing to find deep peace and acceptance before people pass. This last year has been a powerful year of family healing. We don’t know how much time there is on our clocks. This healing is an important step in laying the groundwork for a proper good-bye when that time comes. My heart is happy.

He greeted me by apologizing for getting off the phone so abruptly in our last conversation. (It had been clear he wanted to get off quickly, but I hadn’t taken offense.) Our conversation shifted to our appreciation of “proper goodbyes.”

The conversation then went to Elizabeth Kubler Ross’ emphasis of the importance of being aware of and attentive to small good-byes when losing loved ones. I understand that one. Some of us get to say a proper good-bye at the final moment. Some of us don’t. Kubler Ross noted and valued the little good-byes that lead up to the last moments in the dying process. It’s important that they don’t go unnoticed.

Have you noticed the line we recently added to the blog posts? In some ways, you can think of them as proper good-byes. Before we added that element, it was difficult to see where one post ended and another started.

Practice patterns – like proper goodbyes – with the small stuff and you’ll have them available for the big situations. One of my readers shared this quote from Martin Luther King Jr.

I love that quote and appreciate being reminded of it. I marvel at people like King who speak at great personal risk. I salute and bow to those who change how we think and behave in the world.

Of course, not all of us have a destiny as big as Martin Luther King Jr. Not every truth shared has global implication. It’s easy to undervalue the significance of the small sharings compared to King’s powerful dream.

Your voice matters, even in a small scale.

Yesterday I shared an observation that I had thought might seem minor and obvious. I told a friend that since I backed off on how much time I spend on my own excellence and creations, I feel freer to marvel at others’. While I was speaking specifically about my delight in watching the remarkable athletics in the Broncos championship game, in general, not having to be the one who knows and does all the time has increased my receptivity. I am enjoying and emotionally sharing more in the wins of others.

My friend spent the next ten minutes exclaiming about how important it was for her to hear that. I predict an upsurge of births in Colorado in nine months. Why? Not because marijuana is legal here now, but because the Broncos won the playoffs and are going to the Superbowl. Seriously – there’s a connection between teams winning and birthrates.

Bob and I aren’t making any new Roses, but he is a much happier man due to the win. Judging from my dreams last night where I joyfully celebrated the win with John Elway for several hours, the experience enlivened me, too.

This might be the first football game I’ve ever watched from start to finish. I marveled at how embodied and viscerally engaged the players were. I delighted in the spirited victory dances after great plays (that look a lot like my own dance community expressing their joy.) I imagined being in such a high-stakes, intense game. They play to win, and in the process, they can lose it all suddenly.

My work is far less intense. I don’t have a stadium of people watching what I do. I’m not on national TV with commentators evaluating every move. I’m unlikely to suffer a debilitating injury from one false move. But still I relate to these amazing athletes putting everything they have on the line for something that matters deeply to them.

Bob and I won’t be turning the Bronco win into a bundle of joy arriving next fall. But the inspiration from watching other people live their excellence inspires me to live mine more fully.

How about you? How can you live your excellence more fully? What might you be giving birth to? The Denver Broncos’ quarterback Peyton Manning recently broke all kinds of records. It was fun to hear the sportscasters gush over him like he’s superhuman. In some ways, I think he IS superhuman – not for the records he has broken, but for his ability to maintain humility and balance despite being seriously competitive and incredibly successful.

In a recent game, Manning went up to the Houston Texan’s player JJ Watt and said:

Manning was fine – he just wanted to communicate his respect for Watt’s skill and speed. Way to SpeakStrong!