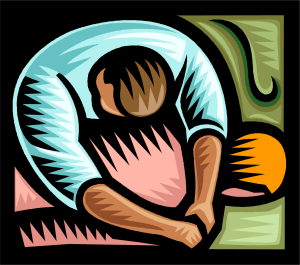 When I couldn’t get my chiropractor Ray to lighten his adjustments, I stopped seeing him for about a year. When I returned, he seemed much more receptive – and less inclined to blame me for “resisting.”

But I still was unable to get him to respect my desire to focus on the adjustment. Ray just likes to talk. I have requested more meditative, focused care many times.

Recently Ray had three people in ahead of me, and the conversation was intense. When they finished and I was on the table, the previous client asked about sudden death syndrome. Ray responded while adjusting. It felt frenetic and unfocused. I sat up and said,

Ray ended the conversation and focused on me. But he still wanted to chit chat.

The next time I saw him I was able to speak with him privately. I painted a picture of the environment I like to receive care in. I compared chit chat during treatment to chit chat in intimacy or meditation. He resisted, of course, and told me I’d have to remind him every time because he has so many people and so many different energies that he can’t be expected to remember. I told him he was making my point for me – that was the very reason he needed to pause, however briefly, to tune in to who is on his table.

He heard me. The adjustment was deep, settled and magical. Some joints moved that had not moved before.

The time after that, Ray refrained from chit chat with me, but for no reason I could discern, he directed the chatter with the woman ahead of me to a discussion of The Museum of Torture. Since there were others in the room, I addressed that in a later email. I noted,

Here’s the thing. I’ve been seeing Ray for ten years. It took that long to make these points clearly and for him to hear me.

I’ve been sailing through conversations that previously were challenging. And that makes life much sweeter, not just in my chiropractor’s office.