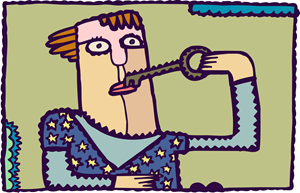 On one level it was no surprise. On another, it was stunning. Betty learned that her previous supervisor gave up on her on her second day. Betty’s manager set her up for failure.

The discovery matches the behavior. When Betty asked for help, the manager literally turned her back. Betty was thrown in with customers with little to no guidance. If the manager replied to a question at all, it was to say something like, “I told you that already.”

Betty has a new job and a great attitude toward her previous manager. She’s grateful for the opportunity to SpeakStrong. I admire Betty – and so do her new employers.

I know the feeling that comes with that kind of passive-aggressive behavior. I’ve been in situations where I tried to open a door while the person I struggled to engage with was covertly slamming it shut. Often they hold a key – like the awareness of their subterfuge – but they won’t share it. I find myself wondering if I’m crazy. Just a little honesty – like – “I want out, so I’m trying to get you to end this” – would save a lot of misery. At least in Betty’s case, the subterfuge was overt enough for Betty to be pretty sure what was going on.

Don’t you wish people would just say what they mean and mean what they say, without being mean when they say it? Don’t you wish we could earnestly put everything on the table and work toward the best possible outcome together? I do. And I love it when I can.