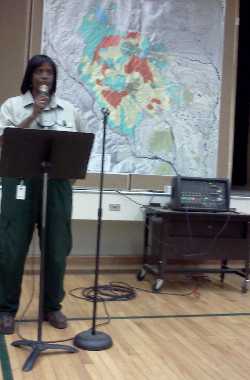 When Jerri Marr, forest supervisor for the Pike and San Isabel National Forests stepped into the UTE Pass resident’s briefing last night, there was an audible gasp in the room. Marr gained fans across the city and neighboring communities with her twice daily appearances on local television for the Waldo Canyon Fire Briefings. I’m in the list of her fans.

Marr also gained respect. When the UTE Pass community realized she would be speaking, we broke into applause. I clapped too. Marr seemed a bit taken aback by, but warmed, by the response.

Marr’s presence and these words underlined the seriousness of the flash flood threat in Cascade and Green Mountain Falls Colorado. Her words didn’t scare me, but they motivate me to take preventative action. They inspire respect for the power of water in nature, just as I recently learned to respect the power of fire during the Waldo Canyon Fire (which started three weeks ago today). I would pay attention and figure out how to be prepared and take all flash flood warnings seriously.
Why has Marr become a kind of a superstar? What makes her such an effective communicator? Why would I, as a communication specialist, prefer to read a book called “The Presentation Secrets of Jerri Marr” (if there was one) to reading “The Presentation Secrets of Steve Jobs?”
Here are some thoughts.

The main thing is, she’s a natural. You don’t get the impression that she is practicing great presentation skills. You know you’re listening to someone who knows, cares and shares.

I contrast that to Steve Jobs who could put on a great performance. He had practiced techniques. I can learn from him too, but in my opinion, Steve Jobs is no Jerri Marr.

Check her out below. She’s got a few kindas in there, but she’s so effective she gets a pass on all the communication quirks that would cost her a few points in a Toastmaster’s meeting.

If you’re a Jerri Marr fan too, I invite you to comment below.