I screamed out loud as I watched the Broncos score the winning touchdown in playoff overtime Sunday. 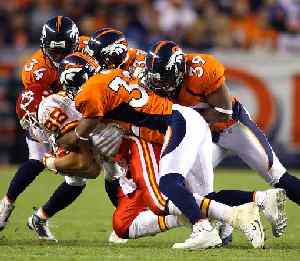 I’m not that much of a football fan, but it was such a surprising play – and game – that I was happily engaged. Tim Tebow surprised a lot of people – they thought he was a one-trick pony. And he had been!

He initially threw his opponents off-guard by his ability to run the ball, but “everyone knew” he couldn’t pass. So all they had to do was guard close in. That left them open for the throws, but since Tebow couldn’t pass, it didn’t matter.

Except suddenly it did. When Tebow went from being a one-trick pony to having more options, he became significantly harder to beat. Suddenly the opposition had to focus their defensive efforts over the entire playing field.

The SpeakStrong Method knows the limits of being a one-trick pony. Effective communication skill is often about dissolving defenses. When you have more than one approach to slip past resistance toward the heart of the issue, it becomes more difficult to manipulate, block and defend. If a direct approach creates blocks, instead of pushing harder, often backing off and trying some surprise moves can break the communication habit pattern that is causing so much trouble.

For example, two managers who lock horns in meetings might find their common ground and form an alliance sharing a ride to a conference. I recently heard one manager say he didn’t have much use for another manager until they did just that and found their goals converged. If pushing forward in a discussion of a contentious issue creates animosity, it might be time to try a new communication approach and talk about the conversation itself, and how you talk with each other.

One important distinction between football and The SpeakStrong Method of communication is that in communication, we don’t dissolve defenses to win over someone. We do it to create clarity and a foundation for effective collaboration. That distinction makes communication a bigger game than football. The Steelers were right to fortify their defenses with every play. In conversation, while there are times when we do need to “play defensively,” more often we get more done with collaborative communication skill.

Who knows how Tebow will show up in the next round of playoffs. One thing we haven’t seen from Tebow yet that makes for excellence is consistency. Tebow erraticness has made for exciting games, but not predictable ones.  But what Sunday’s performance clearly demonstrated is, while you can overcome resistance with a single approach for a while, real skill requires being more than a one-trick pony. That is true for communication skill as well.