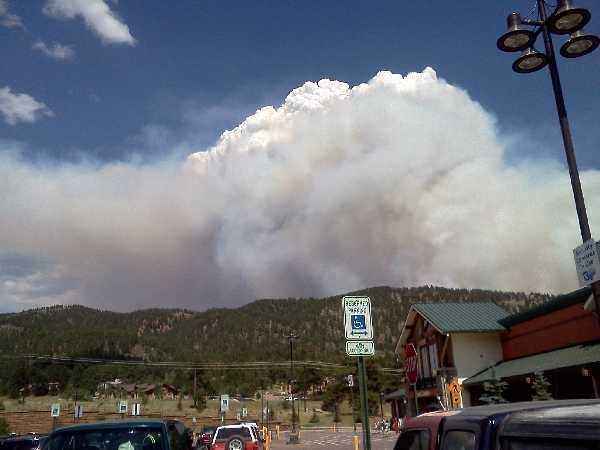 We planned our days around the 8 AM and 4 PM briefings. In between we got out for a few walks and even visited Walmart on Tuesday. There, we saw the fire was moving in the Woodland Park direction. I took two pictures three minutes apart, and the growth between them was really notable. There’s no way we were missing the 4PM briefing that day.

Just before the 4 PM briefing, our friend commented on a gust of wind that was coming from the north west. He told us the city of Colorado Springs would experience that wind in about ten minutes. He knew that from being on the phone with people. We knew that strong of a wind could only be a trouble. We just weren’t sure who it meant trouble for.

Mountain Shadows was put on mandatory evacuation that afternoon during the 4 PM briefing. That was the first signal I got that the winds that were threatening all of UTE Pass, including Woodland Park had, in fact, shifted. There wasn’t much new information, but soon after I received the following email from my son:

“I’ve been listening to the fire radio all day, only hearing firefighters in Colorado Springs and all day it was upbeat, calm, cooperative, “we’re on top of this.”

An hour ago the fire jumped and all the firefighters retreated. They’re running and there is no fire control at this time, and there are structure fires. ‘What I would request is that we quit sending units to this location until we can get a handle on this.’ They are sounding very flustered.”

I listened to the scanner and heard what he was hearing. It took several minutes for news stations to start reporting on how fire was breaking out in the Mountain Shadows area as those residents fled. Firefighters were talking about which houses they could make a difference on and which they couldn’t.

It was an unexpected change in the winds – one that had been forshadowed in the breeze we felt. We were monitoring it as well as we could from Woodland Park, praying for our friends.